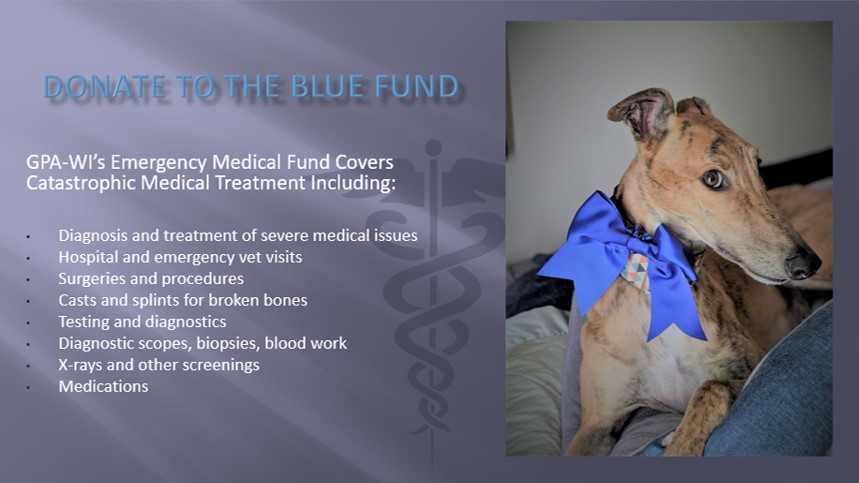 History of the Blue Fund 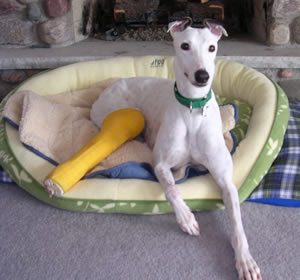 The Blue Fund was established in 1997 to memorialize a wonderful greyhound named Blue who died unexpectedly at the age of seven. Silly, friendly, and gentle, Blue was loved by all who knew him. This fund, dedicated to his memory, gives hope and a chance for a healthy future to greyhounds who are suffering from severe medical issues. Since its inception, the Blue Fund has allowed GPA-WI to take in injured dogs, pay for their veterinary care and place them in loving adoptive homes.

Diablo (at the top of page, wearing a Blue Fund Ribbon) was brought to GPA-WI in from a track in Florida in July.  His nose was constantly runny with a thick cloudy discharge and his lungs were inflamed and congested.  It was unknown if he suffered from a fungus growing inside his nasal cavity that may have eaten into the bone, or had a tumor, or allergies, severe bronchitis, or a combination of all of these.  On two separate occasions while in his foster home, he went into respiratory distress so severe that he needed to be rushed to the vet.  He was put on several different antibiotics, anti-inflammatories, allergy meds, steroids, and given nasal saline washes.  Xrays and preliminary exams could not identify the cause of his issues. 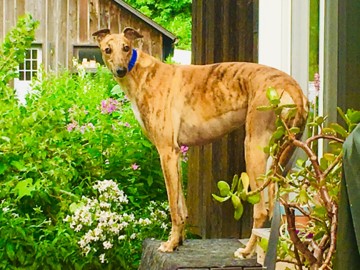 The problems persisted.  In order to be adopted, his medical prognosis had to be established.  Without knowing what his long-term medical costs or issues might be, he could not be placed in a permanent home.  GPA-WI needed to send Diablo to the most advanced canine medical facility in the state, located at UW Madison.  Only there could he receive the necessary scopes and biopsies and imaging required to diagnose him.   Once he was examined and put through extensive testing at UWM, he was finally diagnosed with chronic rhinitis. This condition is relatively rare in greyhounds– an inflammatory disorder of the nasal cavity in dogs due to unknown causes.  Luckily it was not cancer, and there was minimal bone involvement, so he was adopted by one of the GPA staff and is living his best life with three other greys at her house.  The final expense for his emergency medical treatment– over $3000.

Nola arrived at GPA-WI in September 2019 with a previously injured front shoulder.  The owner of the farm where she was born told us that she got hurt at around 5 months old, but didn’t know how she got injured.  The most common way is colliding with other dogs when playing, but we will never know for sure.  Obviously, she never raced due to this injury in her youth.

It quickly became obvious that Nola was in quite a bit of pain.  It was not known at first if she would need surgery, ongoing pain management, or a combination thereof. She would raise her leg up to people and when they rubbed it, it seemed to help.  She had to be put on strict kennel rest to avoid any further pain from running or jumping.

Over the next couple of months veterinarians and orthopedic specialists discussed her x-rays and options with us (GPA-WI). The bones were grinding on each other constantly and the damage was catastrophic. Setting with pins and plates, the most common solution, would not take her pain away.

It was decided that the best thing for Nola was to amputate.  Nola is doing great after her recent surgery.  We’ve all seen that dogs do VERY well with three legs.  It barely slows them down at all.  In fact, Nola is much happier without the constant grinding bone pain.  She has been chosen by her forever family, and is now recovering and learning about home living with her foster family. 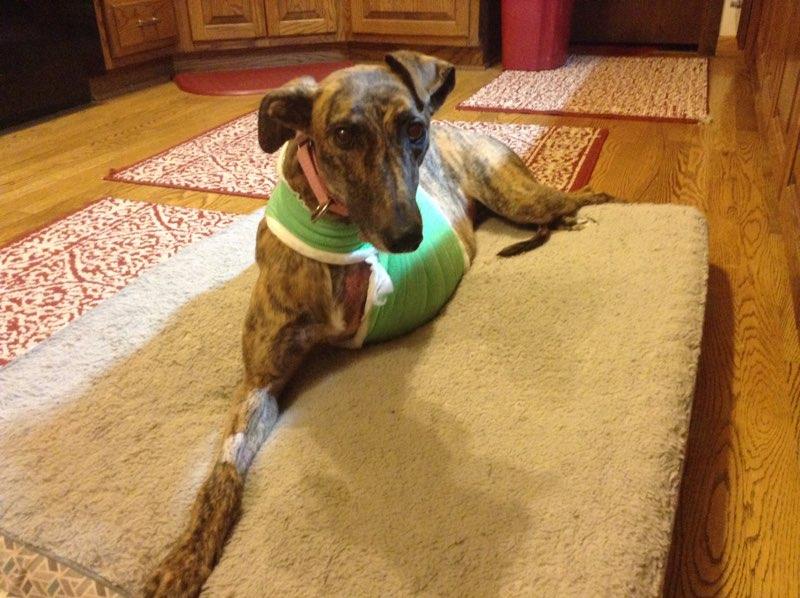 Nola recovering at her foster home

As the holiday giving season begins, will you help GPA-WI with a donation to this special fund? We need to raise $7500 to keep the Blue Fund available for the next dog we take in with medical issues.  Your gift ensures that we never turn away a greyhound for medical reasons.

To donate by check (our preferred method) please send to:

If you wish to make a special donation, perhaps in memory of a beloved animal or person, please indicate the animal or person’s name, and the name and address of the person who should receive the memorial card. If paying through PayPal, you can include this in the “message to seller.” All donations are acknowledged with a card notifying the person in whose name the donation was made.